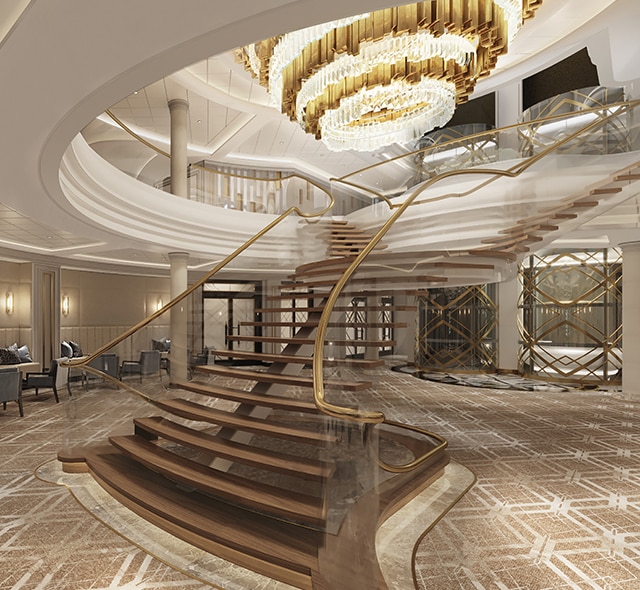 Tasteful elegance surrounds you aboard this gorgeous ship, from twinkling crystal chandeliers overhead to the plush carpets underfoot. You’ll even find it in the fresh and creative cuisine, thoughtfully plated so that every bite offers a unique combination of flavor and satisfaction.

ATHENS — Athens provides a good study in how the New South coexists with the Old South. A lively music scene
(supported by students from the University of Georgia) flourishes in the bars, clubs and coffeehouses of the restored
downtown (it brought the world such bands as R.E.M. and the B52s). But you don’t have to look far to find the Old South: It’s apparent in the many Greek Revival homes and buildings that dot the city, the best example being the Taylor-Grady House. The University of Georgia, across the street from downtown, boasts a number of these Greek Revival buildings, including Demosthenian Hall and the president’s house. The university is where you’ll also find the Georgia Museum of Art (a collection heavy in 19th- and 20th-century American and Italian Renaissance paintings). Off campus you’ll find the Church-Waddel-Brumby House, the oldest surviving residence in the city, now serving as the visitors center. Athens is also home to the fragrant State Botanical Gardens of Georgia. Nature trails wind through the gardens of native flora — the rose garden is especially nice (it blooms May-November). Southeast of Athens in Washington is the Robert Toombs House, the restored home of a recalcitrant Southern politician who hated the North for political reasons and hated the Confederacy almost as much for not electing him president. One of the least mellow individuals the smooth-as-silk South has produced, Toombs never gave up his secessionist fervor or his cantankerous manner. 66 mi/106 km east of Atlanta.

The airport for Puerto La Cruz in northeast on the Caribbean. Isla de Margarita is off the coast.

Lava, spewing from a live volcano–no, you won’t see this in Naples, Italy, and you’re lucky, because the last folks in these parts who witnessed such an event were the natives of Pompeii, who were buried under 30 feet of ash and pumice stone in AD 79. You can, however, visit the beautifully preserved remains of this unfortunate city on a short tour from Naples.

There’s much more to Naples, of course. This picturesque city is one of the great cultural centers, full of extraordinary works of art and architecture in the classical Greek and Roman styles.

Naples, on its justly famous blue bay, is the great city of the south. Located on the southwest coast of Italy, south of Rome. The Amalfi Drive to the south arguably is the world’s most scenic motor route. Naples enjoys a very dry and warm climate year around.

Rhodes (rodz) or Ródhos, island (1981 pop. 40,392), c.540 sq mi (1,400 sq km), Greece, in the Aegean Sea, near Turkey; largest of the Dodecanese island group. Its fertile coastal areas produce wheat, tobacco, cotton, and olives. Tourism and fishing are important. Colonized by Dorians before 1000 B.C., it reached its height as a commercial and cultural center in the 4th-3d cent. B.C. Julius Caesar studied at its renowned school of rhetoric. After its decline, Rhodes was an ally of Rome. Captured (1204) from the Byzantine Empire during the Crusades, it was held by the Knights Hospitalers (1282-1522) and the Ottoman Turks before it was taken by Italy in 1912. In 1947 it was ceded to Greece. The famed Colossus of Rhodes (see under colossus), a statue erected (292-280 B.C.) by the citizens of the ancient capital
city of Rhodes, was destroyed by an earthquake in 224 B.C.

Rome wasn’t built in a day…but you can tour it in just over 10 hours. A teeming anthill of humanity and antiquity intermingled with awful traffic jams, Rome grew up on the Tiber (“Fiume Tevere”) among seven low hills that rise from the river’s soggy eastern banks. It’s a city of many peeling layers of history, of which the bottom layer–that of the earliest Roman centuries–is the most interesting and still astonishingly whole. The hub of this layer is the Palatine Hill, the Forum, the Colosseum and the Circus Maximus.

On the western bank is the Citta Vaticana, the independent papal city where the Pope blesses pilgrims from all over the world. Neighboring Trastevere (“Across the Tiber”) is a mix of Roman, Greek and Jewish subcultures, great for little restaurants and nightlife. Further north on the other bank is “vecchia Roma,” medieval Rome of the Pantheon and Piazza Navona; Renaissance Rome is centered south of the Corso Vittorio Emanuele. Commercial Rome is the city of the Via del Corso, the Piazza del Popolo, the controversial Victor Emmanuel monument and finally the Stazione Termini, the nexus for all trains and roads from Rome.

As always, it has been a challenge, a dramatic adventure. Now it’s finally over, the race against the clock right up to the last minute. Another guide, another region, with the same reasons for existence, the same desire to recount, to amaze and delight, and the increased awareness of discovering a country which is always different and always true to itself. Tuscany is no exception. The common denominator leads us page after page in the discovery of a reality which is already a myth, of a land which is already a dream. This is love at first sight, and the desire to live it to the full. It’s consuming nostalgia and genuine wonder, or else it’s indifference. There are no half measures, no clichés. It’s all here, concealed in stones which whisper their history: cities, towns, castles, and cathedrals, palazzi and bridges. Everything is art, everything is unique, vast genius. Maybe it’s a generic inheritance, or more simply a “modus vivendi”. You can perceive it, but not describe it. Just try, for example, to summarise in a few clear concepts Roberto Benigni’s extraordinary, awkward form of communication. This is Tuscanness. And so are the colours of Chianti, – whether we’re speaking of the wine or the countryside – the genius of Leonardo and the Florentine beefsteak. The rest is history. Rivers of ink have flowed – the Arno doesn’t need them – in attempts to say what has already been said, already written. The truth is that we didn’t discover Tuscany. But we have tried to re-perceive and interpret it, each bringing to the task his or her own cultural baggage and experience of life. We have all contributed to make it different and we would have liked to do more, but a guide by definition remains only a first step towards knowledge. We only hope that it will prove a useful companion along the way. To transmit what is perhaps most aptly encompassed by the term “Tuscanness” is frankly no easy task.

Click on the buttons below to request a quote on this deal or contact us directly with further questions or comments.

Request A Quote Send To A Friend Have A Question? Contact Us

Send To A Friend